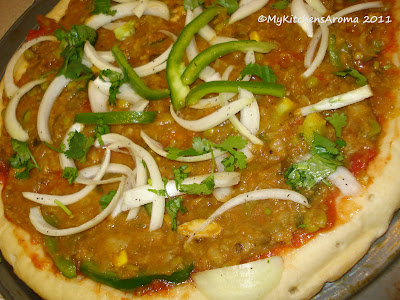 Pav Bhaji (meaning a mix- vegetable -spicy mash served along with buttered bread) is one of the most famous and favorite street foods in India. They have this big flat tava (pan), on which they make the Bhaji as per demand and toast the bread on 'ample' amounts of 'Amul' butter!!!! The combination is just mouthwatering! And 'eye' watering too ..due to the spiciness!
Pav Bhaji is 'M's favorite.Even now, when we visit India, he wants to eat the red spicy buttery Pav Bhaji with an 'extra' Pav Jodi! Whenever I make it at home, he tells me to make it enough for at least 3 meals.He can eat it everyday...if I decide to make it that often, that is!
So..it means many times I have Pav bhaji left over from previous meals. I decided to revitalize the leftovers and make this 'Fusion' pizza---- Pav Bhaji Pizza. Later I got to know that my 'innovation' came a little too late...a restaurant in California already has 'Pav Bhaji Pizza' on menu and my sister tells me, it is very common in Pizza joints in Pune! Oh well....may be someday I will really make some food innovation! 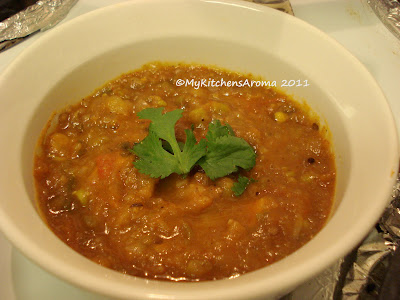 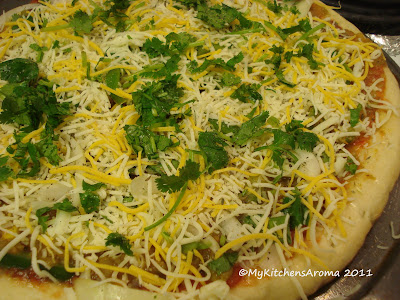 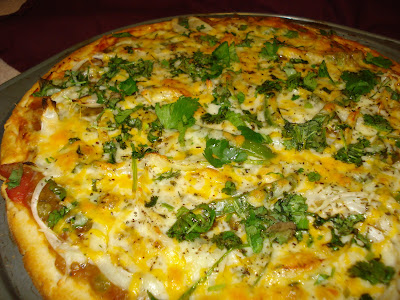 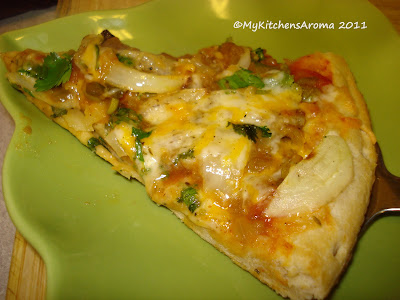 Enjoy the 'Indianized' version of pizza!
Posted by Deepti at 2:53 PM No comments: 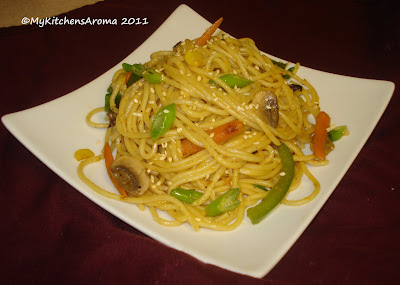 After coming to US, I became a big fan of Food Network.After coming back from work in the evening my favorite show was '30 minute meals' by Rachael Ray. She 'put together' an entire meal in 30 minutes! Now,that is what a 'tired' girl wants after a long day at work...a quick, easy, fast cooked hot meal!!
Rachael uses 'Spaghetti' as Noodles for many of Thai and Chinese dishes. I liked the idea.No need to run to 'chinese' store to hunt 'Hakka' noodles and more important ......pastas are less sticky...so the Noodles come out perfect and non sticky..everytime!

Method:
1) Boil the noodles in ample water with salt. Cook till 'just' done.Do not overcook the pasta...it will get sticky.Stir occasionally.Follow the directions on the packet for how long to boil it(usually 8-10 mins)
2) Drain the pasta well and spread on flat dish. With oiled hand spread the pasta.
3) Meanwhile, in 3-4 tsp oil, fry the veggies on 'high' heat. We want to cook the veggies and still keep them crisp.Cook on high flame for only 2-3 mins.Do not over fry/ cook to make the veggies 'limp' and loose color.The veggies should be crisp and maintain good color.
4) Add the ginger -garlic paste and stir.
5) Add the noodles, sauces, black pepper, salt to taste (soy sauce is salty, so go easy on salt)
6) Garnish with chopped green onions and roasted sesame seeds.
7) Serve hot!! 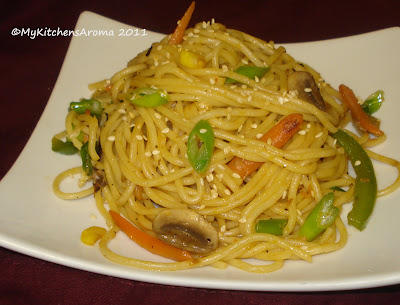 Posted by Deepti at 9:33 PM No comments: