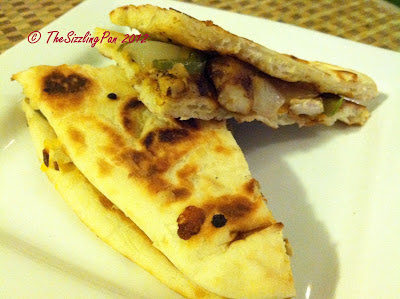 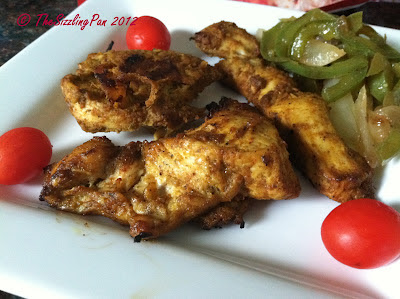 I was watching Guy Fieri's show"Diners, Drives Ins and Dives"  on Food Network the other day. They featured a restaurant named "Red Lion" that made 'Fusion Cuisine". Interestingly they made a Indian -Tex Mex fusion of Tandoori Chicken and Naan Quesadillas!!! Oh Boy...since I saw those...all I wanted to do was.....Bite into those Spicy Quesadillas!!!! 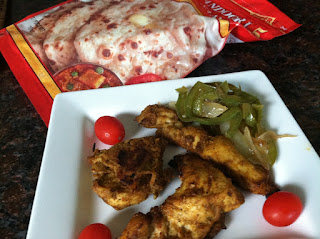 Since I so badly wanted to try those out, for my birthday 'M' suggested that we make those for dinner. We changed the recipe here and there to suit our tastes and the outcome was ...TERRIFIIIIICCCC!!!!
We tried the same Tandoori Chicken in Naan and in Tandoori Rotis.....and we polled that the Tandoori Chicken-Tandoori Roti Quesadillas were a notch above! (Sorry I don't have any pictures for that combo:(
Vegetarian Option:
We also tried the same with 'Tandoori Paneer- Naan ' Quesadillas.....and they turned out just as good.  Just substitute Chicken with Paneer in the recipe 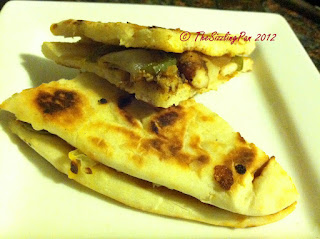 Method:
1) Thaw the frozen naan/ rotis in the refrigerator
2) Pre heat the oven to 375 F/ ~190C
3) Oil a baking sheet and place the marinated Chicken on the sheet.The pieces should not touch each other.Spread them out. Bake at 375 F for about 20-25 mins(For Paneer bake for 10-12 mins or so).Broil for 2 mins to slightly brown the chicken.Let it cool. Shred with hand into pieces to place in the Quesadillas.
4) Take a Naan/ Roti, place some onion-green pepper on the naan/roti, some shredded chicken and some Cheese. Toast on a skillet with some olive oil. Toast till  golden brown and the cheese has melted
5) Cut into squares/ Wedges and Serve Sizzling HOT!! 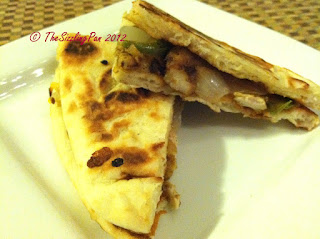 Posted by Deepti at 9:47 AM No comments: 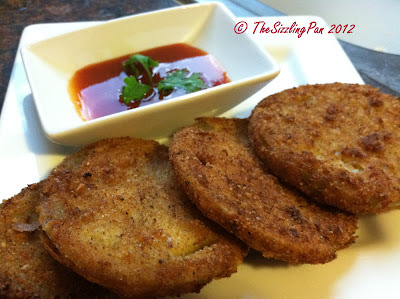 It was few years back, in Ithaca New York, we went to a 'Tomato Festival'. As the name says...it was all about TOMATOES!! There were many different tomato products being sold and in one stall..were the Fried Green Tomatoes.Being a Food Network fan..I had already seen them on TV. I couldn't resist and I tried my first fried green tomato...at the Tomato festival...how cool is that! It had a crispy coating ....covering the ....tangy green tomato slice which was HOT straight from the fryer. 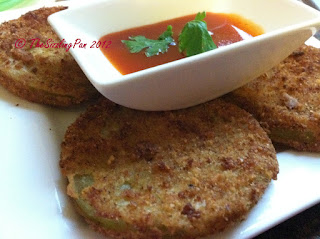 For my birthday couple days ago..I remembered that I wanted to try out this recipe on my own. The coating was the usual flour-egg- bread crumb coating. I wish I had tried the 'besan' coating like the Indian pakodas to try  a variation.Oh well...there is always a next time!! 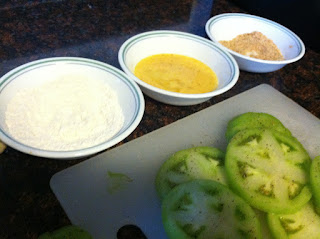 Method:
1) Heat oil in a pan
2)Place the tomato slices rubbed with salt in the first bowl with flour.Let in coat the slice
3) Dip the slice in egg mixture
4) Then dip in bread crumb mixture.
5) Fry the slice till golden brown in hot oil
5) Serve HOT as is or along with what else....MY favorite....Maggie Hot and Sweet sauce!! 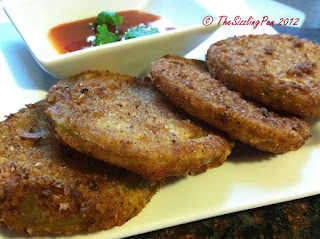 Posted by Deepti at 8:58 PM No comments: